Moon Phases and the Four Elements - A New Model

The eight moon phases is advance - basic material in astrology. They are basic because they aren't hard to grasp and are essential for understanding an essential astrological - astronomical feature. They are advance because they are less known then planet - sign - house astrology and are a layer above it providing extra information and features once you know its basics.
The moon's cycle, from one new moon to the next, takes 29.5 days approximately.

Each has its own special monthly vibe and energy. Also each individual is born under one of the eight moon phases and so he/ she is imprinted with that type of energy for the rest of her life :)
One may say it's the individual's life mission or style, the way he carries himself in the world or his outlook on life. It's all of those things and more, sometime less, it depends on other placements in your chart.

To find out what moon phase were you born under click on this link:
spacefem.com/quizzes/moon
And then you can proceed to interpretation sites and guides, like the one by the awesome astrologer Kelly Lee Phipps who created this wheel diagram thingy to explain the moon phases:
files.meetup.com/2090771/moonphases.pdf
Feast your eyes upon its symbolic interpretations at will or head over to this link on the great Dane Rudhyar's archive site and read about each moon phase from a humanistic - evolutionary perspective:
www.khaldea.com/rudhyar/astroarticles/lunationbirthday_4.php

Now the topic for today is "Moon Phases and the Four Elements".
I'll say here that I've been studying each of the moon phases and have managed to establish a rather curious, if not final, correlation between the 8 phases and the 4 elements.
Here is the new model:
(c) Dima Gur 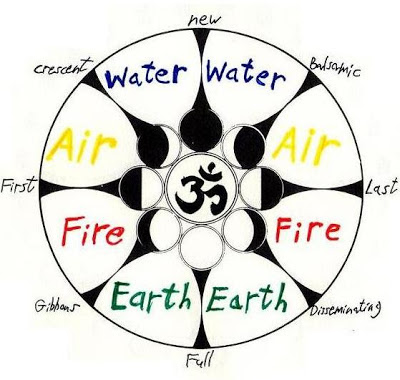 Why is that the case? Well,
If you read the moon phase descriptions in the links above or just choose to relay on me, the logic is as follows: (Notice how each of the following traits echos the energy of the element in question)


Water
* Balsamic moons are self denying, all accepting, able to suffer for long term goals, spiritual or deep in their thinking and know the meaning of sacrifice.
* New moons are spontaneous, live in the moment, go according to gut feeling, are somewhat egoistical, and desires are of prime importance to them.

Earth
* Gibbous moons find themselves in disciple, apprentice or trainee positions, are discerning and discriminating, they can be perfectionists and are good at working towards specific goals.
* Full moons strive to be objective, love it when people can relay on them, devote their lives to fulfilling their vision but can be obstinate and full of themselves.

Air
* Crescent moons are curious, open to new experience, enterprising and are interested in anything new, chic or talked about, they are tied to the past but are unable to resist the lure of the future.
* Last quarter moons are thrown into situations where reorientation, reform or rebellion are needed, they are skeptical, iconoclasts and careful thinkers as this stage characterizes a consciousness or inner crisis.

Fire
* First quarter moons are natural fighters, optimistic and outgoing, they are the self made man or woman of this world, they seek to improve and change existing social structures, a tendency towards black and white thinking exists.
* Disseminating moons are natural disciples and crusaders of some teacher, ideology or a way of life, they popularize ideas and spread the word and they have a role as mediators between great founders and the social masses.


Further evidence can be found in the symmetry of the model. Anything which works smoothly is evidence for functionality in my book.

Water signs are opposite earth signs and air signs are opposite fire signs, just like the regular element scheme.
Also, the phases where the night/ nocturnal dominates (i.e.  last, balsamic, new and crescent) are the spiritual, mental elements (water and air).
While the phases where day/ diurnal dominates (i.e.  first, gibbous, full, disseminating) are the physical, ego-self elements (earth and fire).
Hence I'm tempted to conclude that the nocturnal phases of the moon are more feminine and the diurnal phases of the moon are more masculine.
This corresponds nicely with astronomical logic. When the moon's surface is more than 50% illuminated the sun predominates in the night, the sun is an ancient masculine symbol and mostly personified as male in world mythologies. When it's less than 50% illuminated the dark, the unknown, the irrational predominates; all of which are famous personification of femininity, ancient and modern alike.

I'll point out to a rival model by Portuguese astrologers Helena Avelar and Luis Ribeiro. They are traditional astrologers based in Lisbon, Portugal (as far as I know) and they've passed a mention on a curious correspondence between the four moon quarters and the four humors - temperaments.
Their division is as follows:

This division is somewhat close to the model I'm proposing here although it differs from it on a few principal points. Namely, they are similar in the sense that: Each of their quarters has a corresponding element to an element I've been suggesting, though not in the same order. The two models are dissimilar in the sense that mine is divided by eight and theirs only by four being more general in scope.
Overall both of them have their merits as I can definitely see the logic in this kind of traditional division.

It's interesting to note that according to the traditional model the 1'st and 3d quarters under the new and full moons are more social and service oriented, being characterized by the air and earth elements. The 1'st is about having fun and the social self while the 3'd is about work and the social other.  The 2'd and 4'th quarters on the other hand are self oriented with a strong tone of achievement attached to them. The 2'd being worldly achievement while the 4'th being spiritual achievement. They represent the fire and water elements appropriately.

Which of the two models works best?
Which do you feel more comfortable with?
Do you want to tinker with one of the models?
I'll leave that to you astrology aficionados, in the comments section below.