This article is an attempted solution to the long-lasting dilemma over the following question: which planet is stronger, dominant or in control? The one which casts a dexter aspect or the one which is in the dominant position? The attempted solution will use the concept of slow and heavy planets exerting influence over light and fast planets.

First though, here’s an introduction to the subject and the terms:
A dexter aspect is when a faster planet hurls its rays to a slower one in the direction of diurnal motion of the planets (against the order of the signs). For example, the Moon in Aries by square aspect to Saturn in Capricorn. Such an aspect is considered to be direct, forceful and powerful. Moreso than the opposite, which is called a sinister aspect. This means that the Moon would exert its influence upon Saturn in the example just given.

Sinister aspects refer to a faster planet hurling its rays to a slower planet, against the direction of diurnal motion of the planets (in the order of the signs). Sinister aspects are considered to be weak, distorted, unnatural, and maybe even sneaky. An example of a sinister aspect would be the Moon in Aries casting a square to Mercury in Cancer.

On the topic of dexter and sinister aspects, we could draw a vital parallel. One reason that dexter aspects are considered stronger than sinister aspects, is that dexter aspect are akin to the waxing stage of any two planets which behold each other. Just like the first quarter moon, on its way to become a full moon. This stage represents ‘increase’ and thus strength. The opposite is the sinister aspect which is akin to the waning stage of any aspect, or to the last quarter moon. During the last quarter Moon, the Moon is on its way to disappear and start a new cycle. This ‘decrease’ represents weakness. 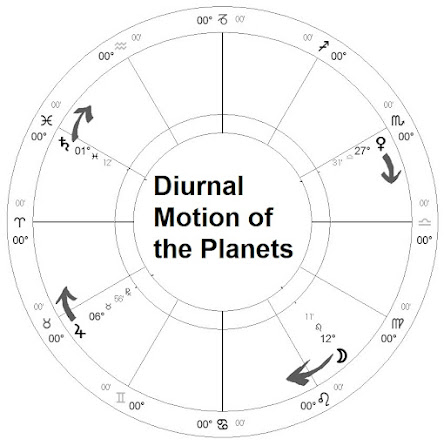 The other notion is that of the dominant or overcoming planet, which would be the one placed first, in the direction of diurnal motion of the planets (against the order of the signs). This planet is the dominant partner in the aspect, so to speak. The logic is that the planet which rises first, leads or is in charge in some way. In the example above Saturn in Capricorn would dominate the Moon in Aries, or the Moon in Aries would dominate Mercury in Cancer.

One intuitive way to explain the effect of the dominant or overcoming planet is the following parallel, which employs the square aspect. If a planet which is dominated is metaphorically placed in the 1st house, then the planet which dominates it will be placed in the 10th house. The tenth is the proverbial place of authority, rulership and power in an astrological chart. This relationship shows the dependency of an individual person (the 1st) on the authorities, state, kingdom or country (the 10th).

It’s also important to consider that slower and heavier planets, according to traditional astrology, exert influence over lighter and faster planets. This is another reason why in the first example above Saturn should exert its influence over the Moon. This, by the way, would still be the case if the Moon was in the dominant position over Saturn, in the direction of diurnal motion.

Here’s a diagram, made by the amazing Deborah Houlding, from skyscript.co.uk.
Deborah’s diagram illustrates all of the terms which have been discussed, and I’ve added to it some planetary speed annotations: 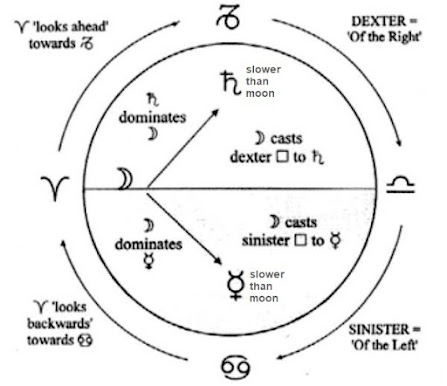 All the above leads me to my proposed solution:
As we’ve established, the dexter aspect will always be formed when a faster-lighter planet applies to a heavier planet, in the direction of diurnal motion. This means that when a dexter aspect is formed, the heavier-slower planet would always be placed in the dominant-overcoming position. This shows a state of affairs under which the minor partner in the relationship (the lighter planet) is appealing directly, with a head held high and “through the proper channels” to the senior partner (the heavier planet). The relationship roles, in such a case, are simple and straightforward. The minor partner appeals directly, if it wants or needs something, to the senior partner. It’s important to stress that a faster planet which creates a dexter aspect would always be overcome-by, or dominated-by, the slower planet.

The sinister aspect, on the other hand, will always be formed when a faster-lighter planet would apply by an aspect to a heavier planet, against the direction of diurnal motion. In such a scenario the natural order is, in a way, reversed. The lighter-faster planet, which is the minor partner, is in the dominant-overcoming position, relative to the heavier-slower planet, which is the senior partner. In such a scenario a sinister aspect would make sense, since the lighter-faster planet can’t appeal or ask the heavier-slower planet directly and “through the proper channels”. Thus, the lighter planet’s appeal or request is deemed to be weaker, indirect, unnatural, or even sneaky and using subterfuge. The lighter planet still wants to receive help, or assistance, but he’s aware of its precarious position. That is, its unnatural location in the dominant-overcoming end of an aspect. Notice that a faster planet, which creates a sinister aspect, would always be in the dominant or overcoming position relative to the slower and heavier planet.

Thus, it seems that there’s no contradiction, and the question of which term is more descriptive of reality is obsolete. From the suggested solution we’re able to see that the two conditions are complimentary, rather than in conflict. Each of the conditions just describes things from a different point of view.

It’s worthwhile to note that traditional authorities seemed to have applied the notions of dexter, sinister and dominating or overcoming to only three aspect types: the square, the trine and the sextile. When we apply the above notions to conjunctions and oppositions, a peculiar logic arises. The faster planet would apply by a sinister conjunction (not a ray this time) to the slower planet, from the dominant position. While with the opposition, the faster planet would apply by a dexter ray to the slower planet in the dominant position. Unlike the square, trine or sextile though, the relationship dynamic here is ephemeral. Both in the conjunction and the opposition, once the aspect is perfected the planetary roles switch from dominant to dominated, as their location relative to diurnal motion is switched. In a way, this may be illustrative of the nature of those aspects, as the opposition is sometimes considered as unstable or fragile. The conjunction on the other hand has a melding effect, and a clear relationship of dominant and dominated isn’t easily established. I would suggest to keep applying these principles to squares, trines and sextiles, for simplicities sake.


If you’d like to learn more about the subject and be exposed to additional points of view, feel free to follow the following links:

Anthony Louis tried to reconcile the two notions, in an insightful article of his, and came to a different conclusion than my own. His conclusion seems to prioritize the planet which casts the dexter ray over the planet which is in the dominant position. The prior planet sets the tone, while the latter planet is in charge of execution. Please see his attempt at reconciliation towards the end of his article:
https://tonylouis.wordpress.com/2020/07/08/the-primacy-of-primary-motion-in-astrology

Deborah Houlding’s masterful introduction article on aspect doctrine, including explanations for many of the terms discussed in this article:
https://www.skyscript.co.uk/aspects.html

If you’ll google the terms Dexter and Sinister, there are a couple of forum threads and facebook group discussions on the topic at hand. Feel free to gorge your eyes there, for extra information and additional points of view.
Here’s one such forum thread:
http://skyscript.co.uk/forums/viewtopic.php?t=4765