But first some background.
In modern astrology we use a reduced dignity scheme where we only consider the rulership of a sign and its exaltation. For example, the rulership of the sign Aries is the planet Mars while its exaltation is the Sun. Conversely you can look at planets which are detriment or fallen within the limits of a particular sign. For example Venus is considered deblilitated and Saturn is considered fallen in Aries.

Here's the full list of the two strongest dignities (The sign of the planet and its exaltation) and its converse detriment and fall.

But that's only part of the story.
Ancient astrologers (Hellenistic, Arabic and else) used a more comprehensive system which included more parameters for rating the planets.
Other dignity parameters included Triplicity, Term and Face which strengthened (or weakened) the planet's ability to "act" or perform its duty.
The great late British astrologer William Lilly (1602-1681) used a table to examine the strength and debility of each planet (from now on: Lilly's point scoring system), he gave each of the dignities a score based on the potency of that particular dignity.
Here's the part about essential dignities:

In this article I'll use Lilly's point scoring system in order to revisit the 'today-excepted' rulers of the signs which only take into account the first two types of dignity (Sign and Exaltation).
I'll show that by merely adding the third strongest type of dignity (Triplicity), which takes into account whether the native was born during daytime or nighttime, our entire system of sign rulership changes.

But beforehand, what's a Triplicity anyway?
Well, in Hellenistic Astrology they used to divide the planets into day and night planets. This is also called Sect, with an inner division between planets of the diurnal sect and planets of the nocturnal sect.
You can read Deborah Houlding's article and try and decipher the logic behind this division, but here's the basic grouping anyhow:

* Some authors consider Mercury to be a changeable planet, swapping between the day and the night sect

This bears resemblance to the division of the signs into masculine (Fire and Air) and feminine signs (Water and Earth).
It's also worth mentioning that contrary to common sense mars is aligned with the nocturnal sect because it balances its hot and fiery qualities, allowing it to excel.
In the same manner cold and rigid Saturn is aligned with the diurnal sect, for balance reasons as well.

Now this is where it gets a bit complicated.
The Hellenistic author Dorotheus of Sidon matched signs with planets according to their sect, or day and night affinity.
There are other divisions by different authors (Ptolemy, Schoener, Morin) but the Dorotheus division has the largest consensus inside the astrological community.
Here it is:

For example: A day birth with Sun in Aries receives a +3 score (according to Lilly's system) for the sun as its triplicity ruler. If that individual was born during the night his Aries sun couldn't exert its power, but say he also had a Jupiter in Aries, in that case his Jupiter in Aries would gain the +3 boost as night ruler.
To bring home the final point, if that individual also had a Saturn in Aries that Saturn would have gained a +1 score as participating ruler. In that case it doesn't matter if the individual was a day or night birth, the participating ruler strengthens in both cases.

All this is fine and well but none of it is new.
Now that I'm done with the intro and you understand how all of this works (hopefully), I can proceed to the main point of the article.

What I did was simple.
Using Lilly's point scoring system, I calculated the strength and debility of all the planets associated with the signs, but I added Dorotheus' triplicity rulers to the equation.
Here are the results: 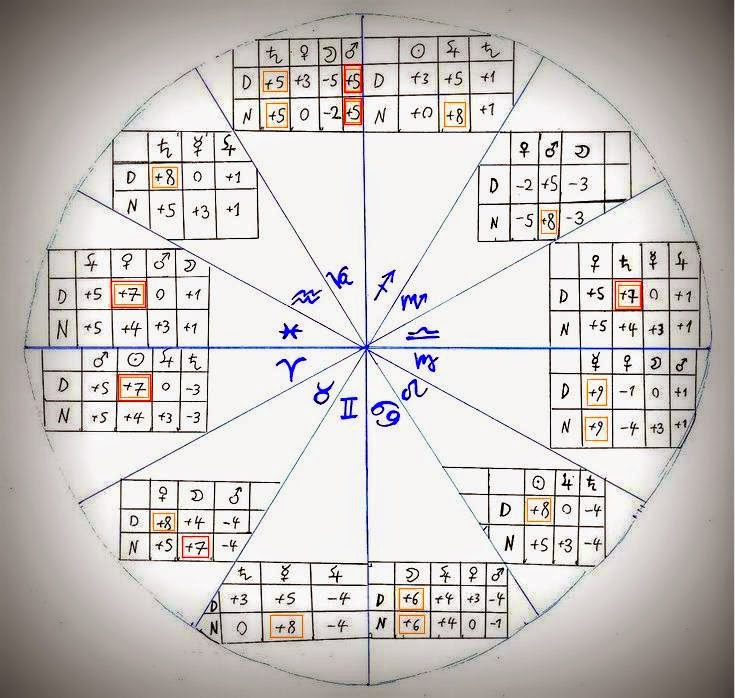 
The chart shows the sign ruler, exaltation planet and the three triplicity rulers for each of the twelfth zodiac signs. Scoring is done according to Dorothean rulerships and Lilly's system for day and night births.

For example: Venus receives 5 points for its sign rulership of Libra by day or by night. Saturn receives 4 points in Libra because it's exalted their by day or night, and it receives an additional 3 points for Saturn by day since it's Libra's triplicity ruler by day - that totals to 7 points by day only. Mercury receives 3 points in Libra by night as it's its triplicity ruler by night while it gets no point by day. Finally Jupiter receives 1 point in Libra both by day and by night as it's its participating ruler.

* It's important to note that the planet which gets the highest score is also called Almuten in the sources. Originally the term is being used to accord for all the dignities, including dignity by term and face which I do not mention in this article.
In the last example Libra's Almuten by day is Saturn (+7) and Venus by night (+5).

The most practical application of these insights is to consider Venus, the Sun and Saturn as the natural rulers of Pisces, Aries and Libra respectively - for day births.
We can also consider the Moon as the ruler of Taurus for night births and Mars as equal co-ruler of Saturn - in general.
Whether a person was born during the day or the night is easily available information, so the information is easily applicable.

An additional set of conclusions is possible due to the latter findings.
Now that we added sect rulers to our understanding of common sign dignity we can differentiate between two signs with the same ruler. For example, we can see in which of the Mars signs (Aries and Scorpio) Mars is stronger?

Some notes and disclaimer:
* Robert Hand in his book on Sect and few other authors have mentioned a triplicity system where the first ruler (night for example) gets a +3 score, the second ruler (day ruler in this example) gets a +2 score and the participating ruler gets a +1.
* Other authors mentioned a system where all sect rulers get a +3 score.
* I personally see less merit in these unbalanced point scoring methods, but some of you might prefer and adopt them.
* When I went with the (+3 / 0 / +1) system I considered the participating ruler as a form of minor dignity, akin to Face in the five-fold system of essential dignity.
* I think that the moon as participating ruler of the water triplicity should be scored at least by the value of +2. Still, the moon is the chief nocturnal agent in the chart.
* It's also worth testing the new "day & night sign rulerships" using Morin's triplicity system, which raised in popularity due to knowledgeable astrology bloggers such as Altair Astrology Blog and Anthony Louis' blog posts.